Not ALL climate-change related (but most of them are)

There's a report out that indicates the number of natural disasters has doubled since the year 2000, mostly due to an increase in climate-change related disasters.

In fact, other than earthquakes and the tsunamis that love them, it's hard to think of any other kind of natural disaster that doesn't have a climate component.

Now, there are some astonishingly adamant climate change skeptics/deniers out there who can deny anything is climate-related, but they are way off base, i.e., they are wrong.

There may be many ways to end one's existence, but death by spaghetti may not be the most attractive.

Actually, I mean death by spaghettification.  And unless you eat really, really way too much pasta, you're probably safe.

But stars that wander too close to a black hole aren't safe.  For the process of spaghettification describes how a star gets destroyed by the massive gravity of a black hole.

And this has just been observed, and set a record for being the closest to Earth that it has ever been observed.

"Although catching a stellar death-by-black-hole is uncommon, astronomers have observed enough by now to figure out the broad strokes of how it happens. When a star ventures too close, the immense tidal force of the black hole - the product of its gravitational field - first stretches and then pulls the star so hard that it's torn apart.

This tidal disruption event (TDE) releases a brilliant flare of light before the debris of the disintegrated star disappears beyond the black hole's event horizon. But that flare of light is often at least partially obscured by a cloud of dust, which makes studying the finer details difficult.
The new TDE, first spotted in September of last year [warning:  highly technical!] and named AT2019qiz, is now helping a team led by astronomer Matt Nicholl of the University of Birmingham in the UK shed light on the origin of this dust."

Pretty good animation of spaghettification  (also in the article at the first link):

For the discerning collector

Well, if you weren't paying attention, you missed out on the chance to bid and buy a nearly complete (70%) skeleton of an Allosaurus.

That'd look good next to the Monet, wouldn't it? 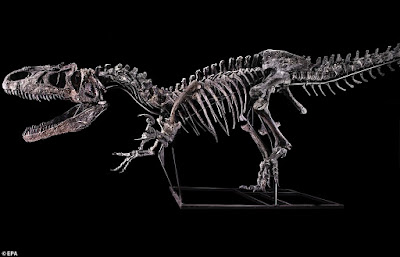 As of today, 3 million Euros is about 3.5 million USD.

With Allosaurus skeletons selling so cheap right now, everyone will want one!

This post features a lighthouse in a great location, on a famous vacation island that attracts the rich and famous (and sometimes gorgeous) to its Grecian shores, and a lighthouse that is in sad shape.

This post features the Armenistis lighthouse on the island of Mykonos in the Aegean Sea.  Mykonos is indeed an island that attracts a topflight and exclusive clientele, as I can ascertain from Instagram.  So one wonders why the lighthouse can't be maintained, as it apparently attracts tourists.

It's located here (I switched things up and used the satellite view, rather than the map view).

The Lighthouse Directory tells us this:

"1891. Active; focal plane 184 m (604 ft); white flash every 10 s. 19 m (62 ft) octagonal cylindrical stone tower with lantern and gallery, attached to a 1-story stone keeper's house. The lighthouse is unpainted; lantern painted white with a green dome. ... Perched spectacularly above the sea with a fine view of Tínos, this lighthouse is a popular tourist attraction. However, local TV has a video documenting sad deterioration inside the building."

Well, it'd be great if somebody would step in and renovate it, as it is a fine lighthouse in a superb place. 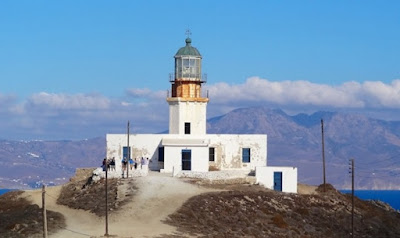 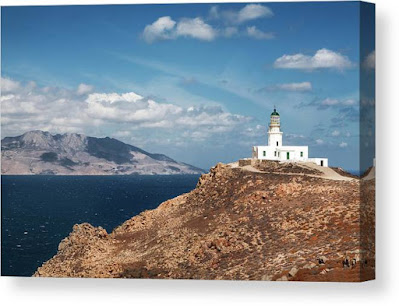 A man and his surface 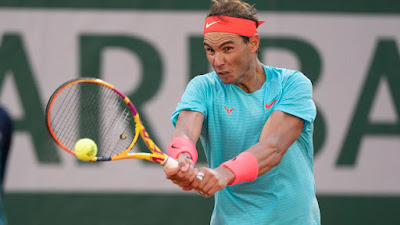 Rafael Nadal has a career Grand Slam.  Meaning he's won at least one of each of the Grand Slam tennis tournaments.   But he has a decided imbalance on clay, where he's now won 13 French Opens.

I haven't written much about tennis for awhile -- I was happy when Caroline Wozniacki finally won a Slam, though she had to defeat Simona Halep in an epic to do it, and I was also pulling for Halep to win one.  Since then, she's won two, the French and Wimbledon, leaving me to hope she can somehow add a U.S. Open.  But there are a lot of good young women players showing up.  So Halep may not ever win another Slam tournament.  Serena Williams, sadly, may also have lost her opportunity for one more.  So now we have Kenin, Swiatek, Barty, all near the beginning of their careers.

But we never know for sure.

I was also happy that Dominic Thiem, a brave and valiant player, won the U.S. Open this year after Novak Djokovic tossed himself out of the tournament with an errant ball toss.  (And yes, I thought the punishment was excessive.)  Thiem and Zverev ended up in an epic that nobody appeared to want to win, and Thiem gamely hung on to get to the line.

So, back to Nadal.  He didn't make it interesting at this strange fall French.  No epics.  Simple pure dominance on clay;  remarkable to watch and revere even as we wish for more drama.  No problem, he has provided that elsewhere.

So, here's to Nadal. All streaks eventually end.  Maybe next year this one will end, too.

We are back on Highway 41, inside the boundaries of the city of Chicago.  Watch what happens.

This is the Schafer (Clara D.) Park.

Between the buildings, you can glimpse Lake Michigan. The street leads to Rainbow Park Beach, which is located in Rainbow Beach Park.

This little park is the Arthur Ashe Beach Park. For those who don't know their tennis history, Arthur Ashe was one of the first prominent black men to play professional tennis, was a civil rights advocate, and tragically died of HIV contracted from a blood transfusion.


The StreetView views will keep getting more impressive.
at 8:45 PM No comments:

As many readers of this blog will determine without much trouble, even though this blog is not troubled by many readers -- I am a huge fan of the Daily Mail tabloid newspaper and even more, their Web site.  They have a lot of interesting articles, plus as any good tabloid should have, they feature

They print fast, they change articles and headlines fast, and most importantly of all, they make great mistakes.

This article is interesting, because it's about a possible eruption of the subglacial volcano in Iceland, Grímsvötn.   This volcano is somewhat unique, because it's under Iceland's largest ice cap (Iceland has a few, and is also slowly losing the smaller ones).  Sometimes when it erupts the ash and lava and such doesn't even break the ice (ha), and all the results is a big glacial meltwater flood, the astonishingly well-named jökulhlaup.  Stronger eruptions do melt enough ice to break through, and then ashy clouds are visible emanating from the crater, as for all good volcanoes.  (See this picture from the previous eruption in 2011, which caused some airline flight cancellations, and you can search for more.  Picture, not flight cancellations.  We've already had too many of those.)

So, Grímsvötn may be on the cusp of erupting again.  That would be what volcanoes do, and it might generate more impressive pictures.  But this article is not about that, because, you see, according to the Daily Mail, an eruption of the volcano might endanger certain Icelandic reptiles.

If you don't believe me, take a look at the verbatim sidebar I screengrabbed right from the Daily Mail's Web site.  Read all of it, every word, from beginning to end. 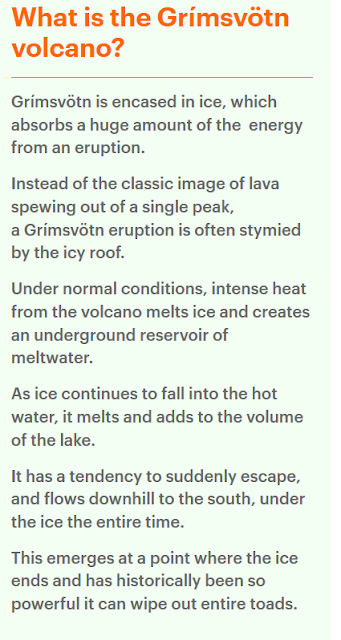 See? I told you it was dangerous to Icelandic reptiles.
That being said, there really aren't any Icelandic reptiles.
Including toads.
So maybe they've been wiped out by previous eruptive activity.  After all, the meltwater flood from the volcano can wipe out entire toads.
(Bridges and roads have also been damaged by such events.)
at 11:01 PM No comments: