You might recognize this lighthouse, and if this works right, a couple of the next ones, too. But I'm not going to give the game away.   So let's just do the basics.

This is the Cape Campbell lighthouse in New Zealand.  (Let's see where.)

Let's get some specifications;  from this site:  Cape Campbell

Piece of trivia:   one of three New Zealand lighthouses that are painted other than just white. 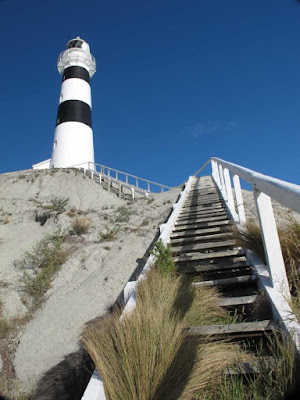 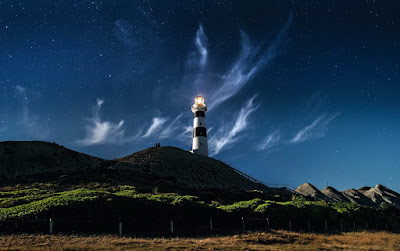 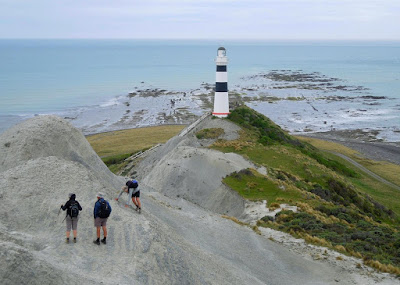 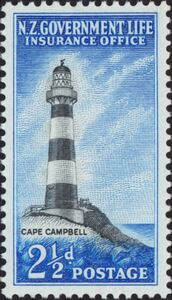 The superbness of Susanna Canzian

But it applies here to the phenomenally exquisite Italian model Susanna Canzian. 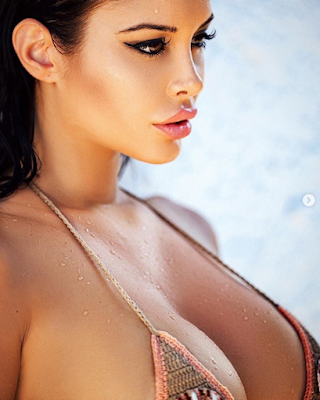 It's a bird! It's a plane! Actually, it's SUPER-antibodies


Yes, I am not making this up.

"For the new project, [Thomas] Rogers (M.D., Ph.D.) and his UC San Diego colleagues took blood samples from patients who had recovered from mild-to-severe COVID-19. In parallel, scientists at Scripps Research and IAVI developed test cells that express ACE2, the receptor that SARS-CoV-2 uses to get into human cells. In a set of initial experiments, the team tested whether antibody-containing blood from the patients could bind to the virus and strongly block it from infecting the test cells.

The scientists were able to isolate more than 1,000 distinct antibody-producing immune cells, called B cells, each of which produced a distinct anti-SARS-CoV-2 antibody. The team obtained the antibody gene sequences from these B cells so that they could produce the antibodies in the laboratory. By screening these antibodies individually, the team identified several that, even in tiny quantities, could block the virus in test cells, and one that could also protect hamsters against heavy viral exposure.

All of this work -- including the development of the cell and animal infection models, and studies to discover where the antibodies of interest bind the virus -- was completed in less than seven weeks."


So now, we  (collectively) have to make more.


Elle Bellamy (now that's a name), who probably still goes by her well-known modeling name Elle Evans, who I first met as Lindsey Gayle Evans, just recently gave birth to her child with Matt Bellamy of the band Muse.   Matt, as those of you who follow these outcomes may remember, is also the father of a child with beauteous three-times-a-charm actress Kate Hudson.

Return to the blog

Sorry for the absence.  Time and tide wait for no man.

I'll catch up on the Lighthouses of the Week this week.

And I've got a lot of catching up to do on other subjects, too.

A flare, a palpable flare


It has been awhile since our Sun provided us with a solar flare (since 2017 of this particular size), so this was indeed news.  As the article states clearly, too soon to tell if this is in the next cycle or just the final vestiges of the last cycle.


This is a post about the observed fragmentation of Comet Atlas, which was written about on May 18, 2020.

Comet Atlas has become a bizarre comet within a comet

Basically, a chunk of Atlas came loose and fell off the main body, and was following Atlas in orbit.

So another way of saying that the comet is breaking apart is to euphemistically state that the comet "isn't holding up well", i.e., the stress of the solar wind is getting to it.

Now, if you recall who Atlas was, mythologically, you must admire the title of this post for a moment.

There, that's done.  So what happened to Comet Atlas since May 18? (I am sure you are wondering that.)

As the previous link was from cnet, let's go back there for an update.

It may not have been holding up well, but it didn't turn into a clump of space rubble either (yet).

After all of this information, we deserve a picture here.

Where we were (or Where were we?) on Highway 41


When last I posted Streetview images for the Highway 41 end-to-end Streetview trek, it was entering historical and scenic Rockville, Indiana.

Why is Rockville historical and scenic?  Because of covered bridges, that's why.

For some information about that:


We're going to have to take a look around Rockville, because it's historic.


By the Ritz Theater.

Downtown next to the Parke County Courthouse, which appears to have been under renovation at the time StreetView drove by.

The Beeson Covered Bridge isn't visible from the road. Since you can't see it, I have a picture below. 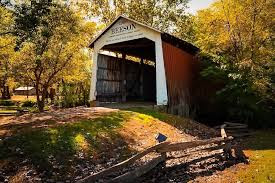 So now that we've had a look at a couple of bridges in a county famous for them, let's get back to the highway, where more nearby adventures await.

Get ready for the Highway 41 trek return


I'm planning to go a long way on the Highway 41 end-to-end Streetview trek starting tomorrow, so don't be surprised.  It won't just be long stretch of highway in Indiana flanked by farm fields;  there is some very great scenery coming up very soon.

So put on your virtual seatbelt and get ready.

When they melt, they melt fast


A new study indicated how fast Antarctic ice sheets retreated and shrank at the end of the last Pleistocene glacial period.

Fifty meters here, fifty meters there, and pretty soon you're talking half a continent or so.

Tell THAT to the skeptics.

A picture of "The Other Boleyn Girl"


After centuries (really, no kidding), a portrait of a woman was identified as Mary Boleyn, the older sister of "Anne of a Thousand Days" Boleyn, who married the king, birthed a queen, and lost her head.   Mary, despite not getting to do any of those three things (she might not have been too eager for the third honor) apparently was also privileged to share the king's bed, may have had two of his unofficial offspring, and may have also gotten intimate with a king of France.  She was married, officially, twice as well.

Despite all of that activity (emphasis on "active"), she died "in obscurity".

Mystery woman in Royal Collection portrait is finally identified after 300 years as Mary Boleyn, who was King Henry VIII's mistress before he fell for her little sister Anne 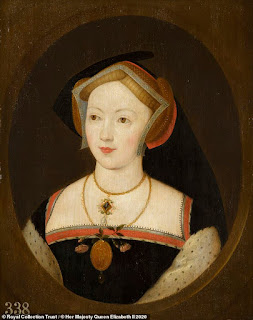 And in the movies (Scarlett Johannsen as Mary) 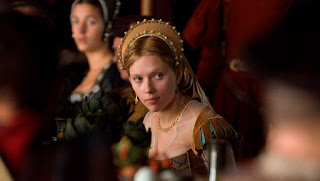 
NASA's OSIRIS-REx mission is getting ready to get a sample of asteroid Bennu.  Just a couple of days ago, they took a very close look at the secondary sampling site, "Osprey".  The primary sampling site is named "Nightingale".

The full-size image is an astonishing 5 mm per pixel.  You can get to that image via the article link.  It takes a moderate amount of time to load on your screen.

We still have to wait several more months until the robotic explorer makes its first sampling attempt in October.  (Maybe by then the coronavirus infection rate will be so low that we'll be able to watch the attempt with a few friends.)

Below is the small version of the big image. 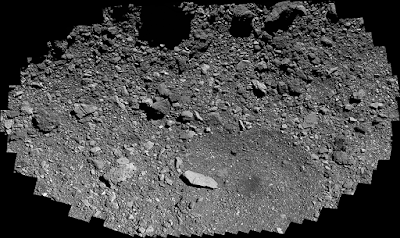 
I've likely kept hundreds -- well, maybe dozens -- more likely a few -- hopefully a couple -- of people wondering all week what and where the "Mystery Lighthouse" from last week was.

Well, the answer is in the title of the post, and also here:  it's the Grosse Point Lighthouse in Evanston, Illinois, a lighthouse that looks somewhat like a big house. That's because there's a big house in front of it.

Surprisingly, even though I've been to Chicago several times, and even in the suburban area on occasion, I never knew this lighthouse existed.

But now I do.  And it's a good one, even on the National Register of Historic Places, the first ever lighthouse so designated west of the Atlantic Ocean.  And if you have ever visited Northwestern University, you have been very close to it.

It has its own Web site:  Grosse Point Lighthouse

Built in 1873, due to shipwrecks occurring on the northern approach to Chicago

The optics?  Well, let me quote: "The illuminating optic at the top of the tower is a second order Fresnel lens, the largest type of optic used on the Great Lakes and one of only five ever installed in lighthouses there. The beam of light from this optic could be seen up to 21 miles over the lake in good atmospheric conditions, and it served both to warn ships of shallow waters around the point and to guide the way into the Port of Chicago."

The lighthouse was decommissioned in 1934.


So I grabbed more than my usual quota of pictures and a video.  Great views in the video (particularly at about the 1:20 mark), though the music is kind of hokey. 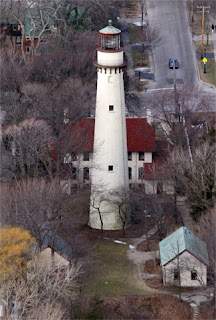 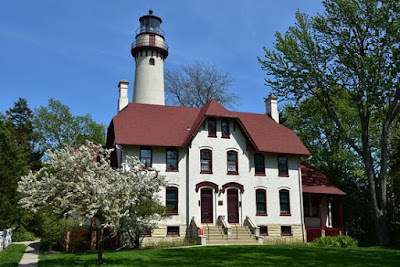 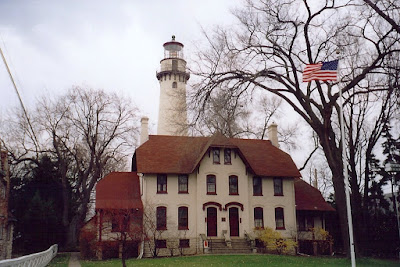 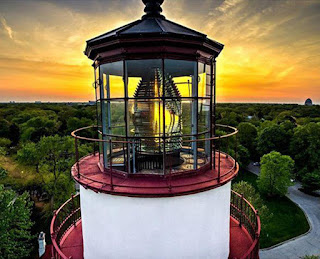 
I haven't played this game for awhile, so I hope that it works.

I am behind schedule by a couple of days, so the Lighthouse of the Week from last week is this post.

Then in a couple of days I'll reveal the answer, and give the full treatment to this light station.

So, what's the name of this lighthouse -- and where is it? 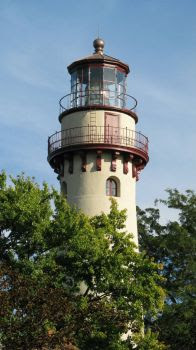 You didn't think I was going to make it too easy, did you?

What did you say your name was again?

All of those are great accomplishments!   She's also a mother of two, fathered by her husband, also a soccer player (or as the Brits say, "footballer"), a male named Paolo and a female named Sophia.  Their last name is Peschisolido (officially via the name of their father). 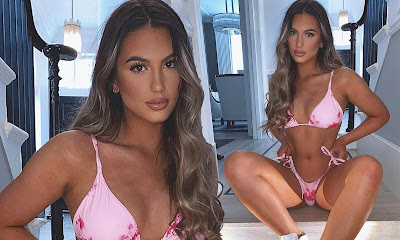 (But there's more of Sophia to be found, if you care to look around.  Nothing of the starkers variety that I can tell, but some good visual entertainment nonetheless.)

How goes it in Wisconsin?


Wisconsin has it tough.   They had to suffer through Scott Walker's governorship, and now they have a legislature of Republican commandos who try every means possible (most of them nefarious) to thwart the decent governing efforts of the recently elected Democratic governor.   And the Supreme Court, which still has a conservative Republican majority (sad as that is), continues to rule in ways that are against the public good.

So, let's review the most recent travesty of justice.  The governor attempted to extend his stay-at-home order, but that was overruled by the aforementioned idiots on the Supreme Court, and this allowed numerous Wisconsinites to get out of the house and into the crowded bar, to do one of the things Wisconsinites do well -- drink.  Beer gets the publicity, but anything in the category of "contains alcohol"  does the job.

So, to review, the WI SC  (ha ha ha!) overruled the governor on Wednesday, May 13, and many Badgers hit the bars that day.  So if you give COVID-19 five days to start sickening those infected, there should have been an uptick in cases starting around May 18 or so.

So what happened?   I'll consult the New York Times.

You can see where May starts, on a rising trend.  Then there's a dip in the infection rate.  The low point of the dip is May 13.   If you use this interactive graph online, you can see how many new cases of infections there were each day.

It's not scientific in the slightest, but it is more than just a bit suggestive that the bar reopening that was aided and abetted (not using that phrase incorrectly) by the WI SC sponsored a big increase in infections.,

Like I said, it's tough living in Wisconsin with the political alignment the way it is. But the conservative Republicans don't seem to have a problem making it easier to get sick and die.