Alaska's Bogoslof volcano, which is mostly underwater with just a small presence above the surface, has been active since mid-December 2016.   Because it's winter, there aren't a lot of pictures.  The Daily Mail has a really good article on this volcanic activity.

Alaska's Bogoslof volcano blows an island to smithereens and sends ash 35,000 feet into the air in repeated eruptions

The third picture, with a volcanic ash plume behind the mountains, must have been taken from Dutch Harbor or Unalaska on Unalaska Island (the largest Aleutian island near Bogoslof).  [I confirmed this with a quick image search.] 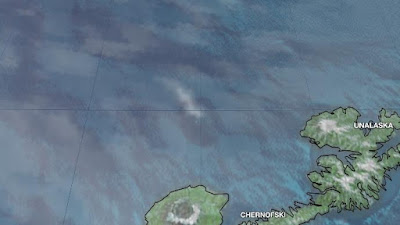