New Zealand has a lot of coastline; it is, after all, a country compose of two main big islands.  I expected that when I looked there I would lighthouses, and I was correct.   And from the moment I started looking, my first choice was obvious.  There aren't many lighthouses with a background like the Cape Egmont Light.

The background is Mount Egmont (also known as Mount Taranaki, which is probably the preferred native name by now).  I stuck with Mount Egmont because that explains the name of the Cape Egmont light, naturally.  By either name, the volcano is one of the most spectacularly isolated volcanic peaks on the planet.   And the lighthouse is on the coast in front of it.  So a lot of the pictures of the lighthouse have the volcano in it as well.

Here's an excerpt of the description at The Lighthouse Directory (which I had been calling UNC, because that's where it is based). Full description at  Lighthouses of New Zealand:  North Island.


"1865 (relocated to this site in 1881). Active; focal plane 33 m (109 ft); white flash every 8 s. 20 m (65 ft) round cast iron tower with lantern and gallery, painted white; lantern roof is black. The original 1st order Fresnel lens, removed in 2000, is now displayed in a 2/3 replica of the lighthouse at Warea. ... Prefabricated in England by McLean, Simpson and Co., the lighthouse was first constructed on Mana Island near Wellington, but its light was confused with that of the Pencarrow Head Light. The tower was relocated to Cape Egmont in 1877, but it was not activated there until 1881." 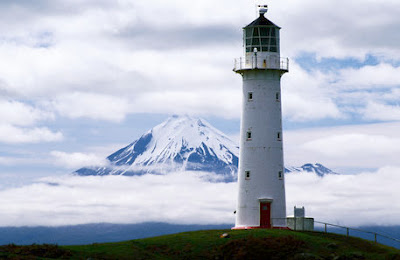 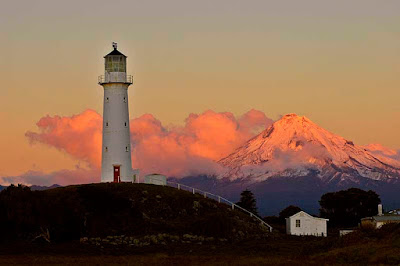 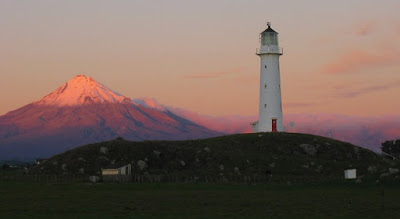 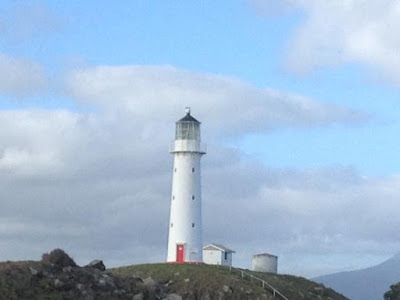