Both climate change experts and climate change deniers (few of whom are anything close to experts) watch the Arctic sea ice extent numbers every summer with trepidation.

The experts fear, rightly, that the decline in Arctic sea ice extent is both irreversible and an unmistakable indication of a warming Earth.   There are lots of feedbacks (loss of albedo, warming waters that sunlight penetrates into, warmer land releasing methane from permafrost) that this sea ice decline can exacerbate.  Now, sea ice volume, which is also going down a lot, is probably a better indicator, but sea ice extent can be easily seen with satellites.

Well, here's what the sea ice extent looks like as of right now: 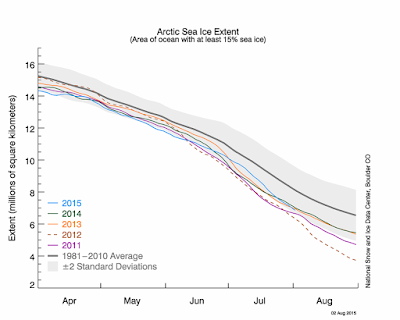 Now, climate change deniers fear Arctic sea ice extent precisely because of what it shows -- that the world, particularly the Arctic, is getting warmer.  It's one of the clearest indicators of that.  So that's why they loudly cheer any slight increase over the minimums that have been seen just a couple of years ago, and downplay any proximity to those minima -- which this year is approaching.  It probably won't be a new minimum, but it'll be close, and that means that nothing up north is really getting any better.